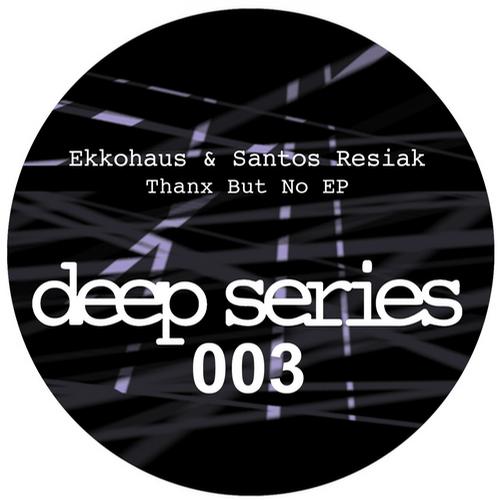 Deep Series is back! The third Deep Series features a fascinating symbiosis of two individuals: Ekkohaus and Santos Resiak. The two of them started to work on this project in 2009 and are now finally ready to share it with the rest of the world. During that time, Ekkohaus made a splash with a whole array of top releases e.g. 2020 Vision, Circus Company and Cargo Edition. Santos Resiak was also having a blast ? e.g. after his last release at Mothership.

The three tracks on the new Deep Series fuse together the artists’ still unbroken enthusiasm for deep sounds in one melodic common denominator. “Thx but no” is a homage to the saxophone (btw: played live by Robert Wuerz). Heavy with groovy loops the track creates a free floating ambience reminiscent of a Jazz Club in New Orleans or a night club on an early morning in Berlin. The B-side of the EP goes back to the deep roots of the series. “All is Gone” and “Lost Boys” feature the deep sounds we know and love. Chord by chord, listeners will be dragged into it deeper and deeper and deeper and….